﻿﻿“It’s the Who meets the Ramones meets the Easybeats meets Beach Blanket Bingo! It’s the criminals Australia wants to ship back to England and call it even! It’s the High Priests of the Barbarella Girl God Love Cult! It’s The Chevelles!” - Little Steven Van Zandt

It was the summer of 1989-90. The twin peaks of revivalist 60’s psychedelia and post punk garage rock and roll had collided in Australia. Out of the West Australian surf crawled four long-haired boys determined to make their own special guitar noise and The Chevelles were born. Featuring members of The Stems, The Kryptonics, The Freuds and The Diehards the band has showcased a wave of blistering guitars, soaring harmonies, and head shaking tunes through their 20 year history.

The Chevelles’ debut album “Kids Ain’t Hip” (1992) was released on Survival Records in Australia and Europe. The single “Show Me Your Love” received heavy rotation on JJJ in Australia and the band quickly developed an underground Australian and European following which was backed up by extensive touring in both regions. The Chevelles’ 2nd studio album “Gigantic” (1993) was released to rave reviews, and the band was featured prominently on many European rock radio/TV playlists. In France, “Gigantic” spent two months on the Rock 30 Radio Chart, entering at No 3. alongside such luminaries as Sugar, Suede, and Aerosmith. By the end of 1994 the band had blazed their way around Australia three times and charged across Europe with an electrifying 42 date tour.
In 1997, The Chevelles released an exclusive Brazilian compilation titled “Delirium,” which cemented the band in the country’s surf market. Between 1999 and 2004, The Chevelles toured the region four times, landing tracks in three surf movies, and playing a wild beach festival to over 30, 000 people. “Rollerball Candy” (1999) was released in Europe, Australia, and Brazil, further cementing the band as the torch bearers of Australian Garage Power Pop movement. In 2003, The Chevelles released their first U.S. album “Girl God” on ZIP Records. 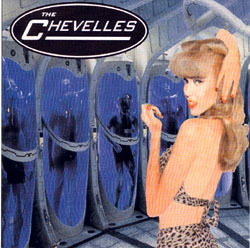 In 2008, Little Steven’s Wicked Cool Records signed the band to a worldwide deal, including their entire catalog and publishing. The deal has culminated in the release of “Barbarella Girl God - Introducing the Chevelles.” “Barbarella Girl God” features Little Steven’s Chevelles favorites, including many cuts heard over the years on Steven’s Underground Garage radio show. The band’s catalog was released digitally (including their most recent album “Accelerator”), yet “Barbarella Girl God” is an exceptional collection, and a perfect album to share with the world on the band’s 2010 20th Anniversary Tour.
The Chevelles have played over 1000 live shows in their career and have earned their reputation as “Australian Cult Garage Power Pop Legends.” The deal with Wicked Cool has created new opportunities for their brilliant songs. For example, “Get It On” was featured in the “Rock Band 2″ video game and their single “Get Back To New York City,” was broadcast on Fox during the 2009 MLB World Series

On their 20th Anniversary Tour, The Chevelles firied up their 350 Chevy again and brought their Tsunami of guitars and melody all over the world. The 20th Anniversary World tour started in January at the prestigious Australian
Festival “The Big Day Out” and then the band extensively toured Australia, the US (including SXSW 2010), Europe, and Brazil.

“The guitars are some of the biggest in the business, towering power chords straight from the loins of Pete Townsend, almost too big, and always melodic in an immaculate way” Houston Press, USA